In the fall of 2016, PIDC Construction began an HVAC controls and infrastructure upgrades project at the Whitehead Institute for Biomedical Research — a world leader in biomedical research and education. Located at 455 Main Street, Cambridge, MA, the seven-story 253,644 sf building — including research labs on the upper four floors — was originally constructed in 1984 with an addition following in 1995. The building was in need of a substantial HVAC upgrade to support the Institute’s mission for the next 30 years. Building operations reliability, redundancy and continual availability of equipment is vital to its mission of the Institute. The project was divided into two main components: laboratory HVAC controls upgrades and infrastructure upgrades. 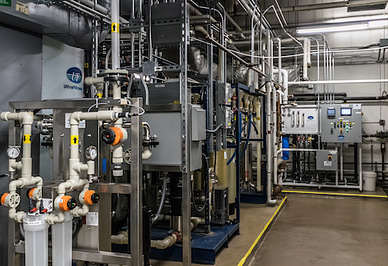 The lab-floor HVAC upgrades include the conversion of the existing antiquated HVAC controls — from pneumatic to direct digital (DDC) — to allow for energy efficiency, reliability and full integration into the building automation system. Conversions began in the fall of 2016 and include ductwork, hardware and controls upgrades, a full balancing of each lab space, and operational review. PIDC has since completed conversions on all four of the research floors including all lab, common, equipment and office spaces. Through upfront planning, an existing conditions survey and direct coordination with the lab users — PIDC was able to complete this work on a 75%-day shift with minimal disruption to the tenants — thus keeping the overall cost of project premium time to a minimum.

The building infrastructure upgrades work that began in late-summer 2017 involved the replacement of all major mechanical equipment serving the building. A large electrical infrastructure upgrade was also completed. PIDC worked closely with Whitehead facilities personnel from the outset — and with the project engineer BR+A in mid-2016 — to finalize equipment selection and develop a work sequence for a systematic project approach. This was accomplished while considering the bottom line and keeping the building fully operational.

In addition to working with Whitehead to develop a project work scope to fit the budget, PIDC procured all major equipment directly while managing the bidding and awards for all major trade packages. The work scope included the replacement of 6 AHUs, 9 exhaust fans, 1 cooling tower, 4 chillers, multiple pumps, piping upgrades, 4 condensing hot water boilers, an energy recovery system, onsite clean steam generation and conversion from onsite steam production to city steam, as well as controls and electrical upgrades.  The project was completed in the spring of 2019, on-schedule and under budget.